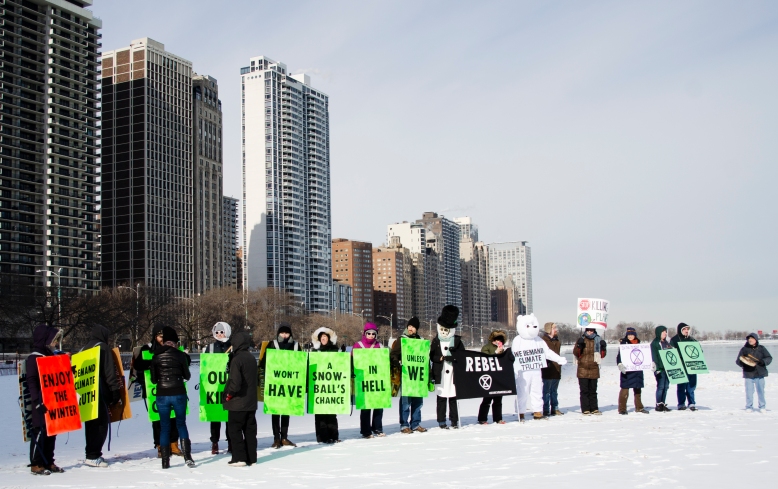 Extinction Rebellion Chicago launched on the frigid shore of Lake Michigan on Saturday, January 26, 2019. XR Chicago chose to make their first public appearance alongside a long-standing Chicago tradition, The Polar Plunge, an event which features hundreds of volunteers diving into the freezing Lake Michigan in the dead of winter to raise money for various charities and nonprofits. This tradition, however, could be in jeopardy as climate change threatens to disrupt the weather patterns that humans have grown accustomed to.

With only two weeks notice to recruit, plan, and organize, XR Chicago turned out over 20 members to announce to the world that they are demanding climate truth. True to the principles of the International Extinction Rebellion, the Chicago-based group participated in non-violent direct action. The group was certainly vocal, making their presence known with chants like, “Fires, hurricanes, and floods! Just a sign of things to come!” and “We love the Polar Plunge! It looks so fun! But because of climate change, the polar bears are done!” This is no joke. The Russian territory of Novaya Zemlya has recently been forced to declare a state of emergency because of “dozens of starving polar bears who have been ‘chasing people and entering residential buildings,’” rather than surviving on their natural prey. 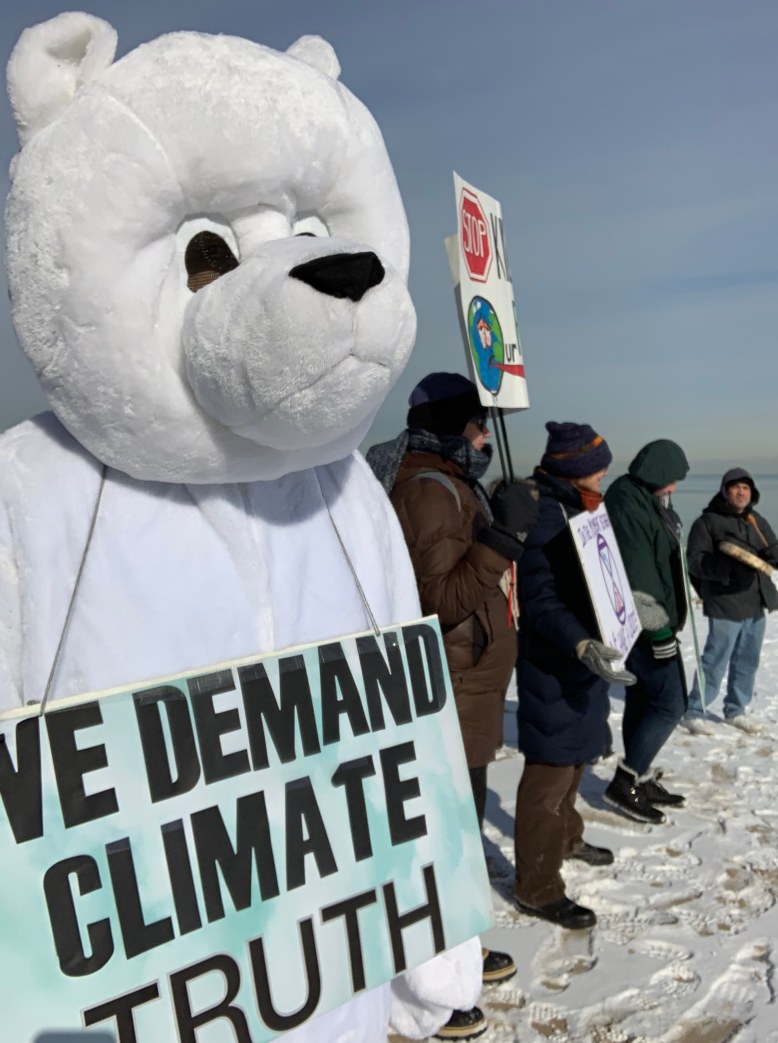 While the primary focus of Plunge participants was retaining body heat, many of them approached the group for information, conversation, and photo opportunities. Organizers of the Polar Plunge also expressed support for the peaceful protesters, who made it clear they were not protesting the Plunge itself, but the lies, deception, and inaction of government and media regarding the climate crisis bearing down on humanity and all living species.

The hope is that through actions such as the Polar Plunge demonstration, numbers will grow to a size that will lend itself to more disruptive actions in the future. Attempts at environmental legislation have proven to be wildly inadequate and therefore must be met with massive direct action. XR Chicago will join Extinction Rebellion groups worldwide in the International Week of Rebellion beginning April 15.


Extinction Rebellion US is not affiliated with, nor do we support XR America. Our heart and solidarity is with climate justice. XR America has removed the XR US 4th demand and replaced it with an “All Lives Matter” demand and the foundation of their organization and work is based on the false and discredited idea that the Climate and Ecological Emergency (CEE) is separate from social justice.


Extinction Rebellion (XR) is a do-it-together movement. All our design and artwork can be used non-commercially for the purpose of planet saving. This does not mean creating merchandise for fundraising or sending XR a percentage of your sales. We do not endorse or create any merchandise and we will pursue and prosecute anyone who does. The Extinction Symbol was designed in 2011 by street artist ESP, who loans XR usage on the same basis: www.extinctionsymbol.info.